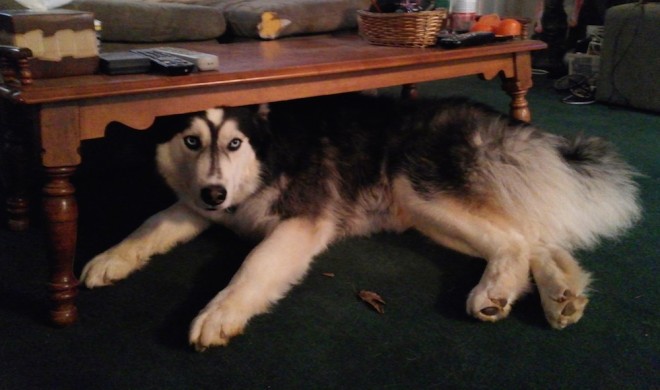 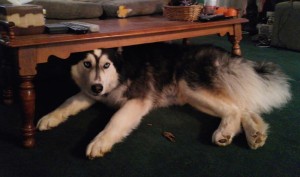 Butch trying to hide from my son. He doesn’t quite fit in his safe place anymore!

I have a serious problem at home right now. My son spends a lot of time on his computer (no surprise there to any of you, I’m sure!). During these times of programming, learning, chatting, and playing games a lot of energy builds up inside of him. His current way of releasing the energy and handling “boredom” during breaks is to constantly tease one of our Huskies.

His favorite thing to do is to immediately corner the pup (and by “pup” I mean our 100-pound boy who was the runt of the pack!) and start grabbing his fur or poking him until he starts snarling. Justin loves the snarl face. But he doesn’t stop there. He perpetually snaps at him with his hands until the puppy snaps back with his mouth. Getting his hand away just in time is a game for my son. Unfortunately, it’s a dangerous one.

While Butch, being more Malamute than Husky and more laid back, would never intentionally hurt my son or be aggressive toward him, dogs have a threshold for teasing. In my county, if a dog bites someone they are immediately removed from the home and euthanized without question. Of course, Butch has never hurt my son to date, but I know as a parent and a dog owner that the possibility of my son going too far lives in the back of my mind and it could have a very bad outcome.

I have tried explaining to Justin that Butch would get taken away and put to sleep (and to someone with Autism that means literally what it sounds like – someone making him take a nap). I have warned him numerous times that he could get hurt very badly. No amount of punishing, yelling, bargaining, or social stories have persuaded my son to stop teasing the dog.

Then I remembered a recent video blog by Carla Butorac about an app called My Talking Pet. This gave me an idea!

Using a communication style called NVC, I wrote a short script as if Butch were telling Justin how it makes him feel when he is constantly teased. NVC is best explained this way from NonViolentCommunication.com:

Most of us have been educated from birth to compete, judge, demand and diagnose — to think and communicate in terms of what is “right“ and “wrong“ with people.

We express our feelings in terms of what another person has “done to us.” We struggle to understand what we want or need in the moment, and how to effectively ask for what we want without using unhealthy demands, threats or coercion.

NVC provides a “template”, or a four-part process to an empathetic and compassionate communication style. I’ve been told by Autistic adults that NVC’s template really helps solve some communication riddles for them, as it’s like a linear formula that can help express feelings and needs in a safe way.

The four-part process starts with Observations: “When I (see, hear, notice)…” followed by your Feelings about the observation: “I feel…”. Next you state your Needs: “… because I need/value…” and finally presenting a clear, doable Request without demanding: “Would you be willing to…?”

I decided to give it a shot. Here is the video that Butch made, asking Justin to stop teasing him using this clear and compassionate communication style.

Keep in mind that we continue to experiment with physical ways for Justin to release energy and get more exercise. One way is using Adventure to Fitness videos (also found on Carla’s wonderfully resourceful Blog), which I’ll be talking more about on my Web TV show this week. Stay tuned for more about this great fitness program for your kids!

In the meantime, are there ways you are demanding a behavior from your child that they keep resisting? Could you reframe it with the NVC template and try again? Let me know your thoughts by commenting below!

If you are a teen or adult on the Autism Spectrum or a parent or professional that engages with someone on the Autism spectrum, you may be interested in how the Social Skills practices of NVC can serve you.

My new friend Bob Yamtich is an Aspie adult who is trained in a social skills process called Nonviolent CommunicationSM (NVC). He has shared this process at Asperger’s support groups in the San Francisco Bay Area and many people shared how much it contributes to them in their communications.

He is visiting Atlanta and offering an introductory Tuesday, June 19, from 7 to 9 pm at the workshop space of local NVC trainers in Tucker. It will be will be a combination of mini-lessons, live modeling, and active practice will help participants get an introduction to Nonviolent CommunicationSM. Bob invites teens and adults on the autism spectrum, and professionals and parents who work with people on the spectrum.

Some great things included in this workshop:

So what the heck is NVC?

I absolutely love the description on the site of local GaNVC trainers, Sacred Space:

What is unique about Nonviolent Communication (NVC), beyond other restorative and life-enriching tools, is that it gets us out of our stories — the stories that we’ve already told over and over to no avail to deaf or disinterested ears, without relief. NVC moves us beyond relating what’s happening to us via analysis, blame, criticism, evaluation, or judgment — beyond stories based on verbal violence. NVC helps us address what’s alive in us today … this moment … so that our histories don’t continue to overshadow and dictate our present.

The tools of Nonviolent Communication help us reach the frustrated needs behind strong feelings and the stories. NVC connects us with others through attention to the universal needs that we all share, thereby fostering empathy. NVC fosters understanding, genuine connection and the resulting opportunity to jointly co-create strategies for resolution that can address the needs of all concerned. This practice can help assure that all voices are valued and heard before strategies are formed.

I am very excited to learn more about the connection Bob has discovered between NVC and helping those on the Autism Spectrum be more in touch with their needs and feelings. I know this knowledge will help me in my training programs for Emergency Responders.

If you are local to Atlanta and wish to attend this workshop, please RSVP to Bob at bobyamtich@gmail.com.

I will be posting a follow up regarding what I learned, so look for that soon!