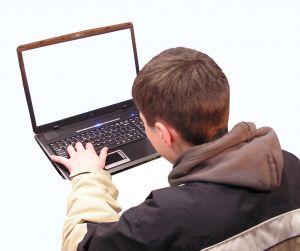 A few mornings ago, my son knocked on the bathroom door to excitedly tell me he was chatting with “Him”. Naturally the next words out of my mouth were, “Who’s THAT?!”

He explained that he was just surfing the web and a random chat window popped up, not associated with any instant messaging or gaming program. He told me the person’s name was “Him” and that he had a funny whisper voice.

Of course I immediately wanted to know what things my son said to “Him” – did he tell him his real name, where we live, how old he is? We have been over many, many social stories regarding Internet safety myriad times.

Justin started crying, revealing that he told the mysterious chat guy that he was 10, which broke one of our family rules. I comforted him (amazed at his reaction to a broken rule – this is HUGE and NEW!!) but also dug further into the situation. Three things that “Him” said really alerted me:

“I can hear you speaking”

The chat window disappeared, and I told Justin to take a screenshot and send it to me if it popped up again. In the meantime we searched his computer for programs that didn’t seem to belong but I could find nothing. (I’m a Mac person… didn’t really know what to look for but hoped it would be obvious!)

That afternoon when I came home, Justin told me that “Him” opened a new chat window and tried to engage him in conversation. When my son wouldn’t comply the creep opened my son’s CD drive! Wha? He had remote access? The next thing you know he hid the task bar and all my son’s desktop icons.

I had him shut down immediately.

Luckily, the dog and pony show of hiding icons and opening a CD drive was the worst activity that we saw. “Him” could have locked up my son’s computer, changed passwords, or worse – turned on his webcam and watched! Ironically, it was my son that found a Remote Access Permission setting in the Control Panel and disabled it. We believe that stopped “Him”.

However, with all the items Justin downloads on a regular basis, this (or worse!) could happen again.

So how do you protect a child that figured out how to write custom code and change online video games, film his screen while walking through his tutorial process and post how-to videos on YouTube by himself?

The FBI website has some great general Internet Safety Tips for Kids. To simplify for children with Autism, I created this:

How about you? What safety tools do you have in place for your children? Share by commenting below or posting to the SOA Facebook page!

Children should carry or wear something lit for visibility on a dark night – this could include a flashlight, glow-in-the-dark bracelet or necklace, or something flashing on their costume.

Trick or treat in familiar, friendly neighborhoods. It’s a good idea to stay away from unknown areas – stick to places you know!

Wear comfortable shoes that fit well! While the 3-inch heeled, sparkly go-go boots that don’t quite fit are just precious, you will avoid lots of whines and winces with well-fitting shoes. Trust me on this one – I have walked this path before! Save the clunky robot feet for the party.

Plan a bathroom break, and make sure the costume is… accessible. I have also learned this lesson the hard way! Remember that scene in “A Christmas Story”? “I can’t put my arms down!” Yep. Been there, done that.

Choose a treat sack that is easily toted. It is easy to get sucked in by the cutesie Halloween bags on display in the stores, but there is potential for an unpleasant experience when your sack is too heavy (Moooommmmmm – carry this!), too small to hold all the confectionary goodness, easily ripped or broken, or has any protruding parts.

The same goes for props – make sure they are not sharp. Swords, daggers, large and awkward items can become very dangerous if the child trips and falls on them. Though they add the icing to your child’s costume, they will be ditched or broken early into the evening.

Use common sense when it comes to local weather and costume type. If necessary, keep children hydrated and cool; or, on the flip side, make sure they are warm enough in colder climates.

Stick to the sidewalks. Do not let your children run across residents’ lawns. Not only is it disrespectful, but in the dark most obstacles (sprinklers, hoses, rocks, lawn gnomes) are not visible.

Listen to your child’s cues. You may have mapped out and ambitiously planned a marathon route under the guise of “more loot for the children”, but if your little one is getting tired, cold, or just plain over it… go home!

Have a Happy and Safe Halloween!!

He sleeps in this costume...