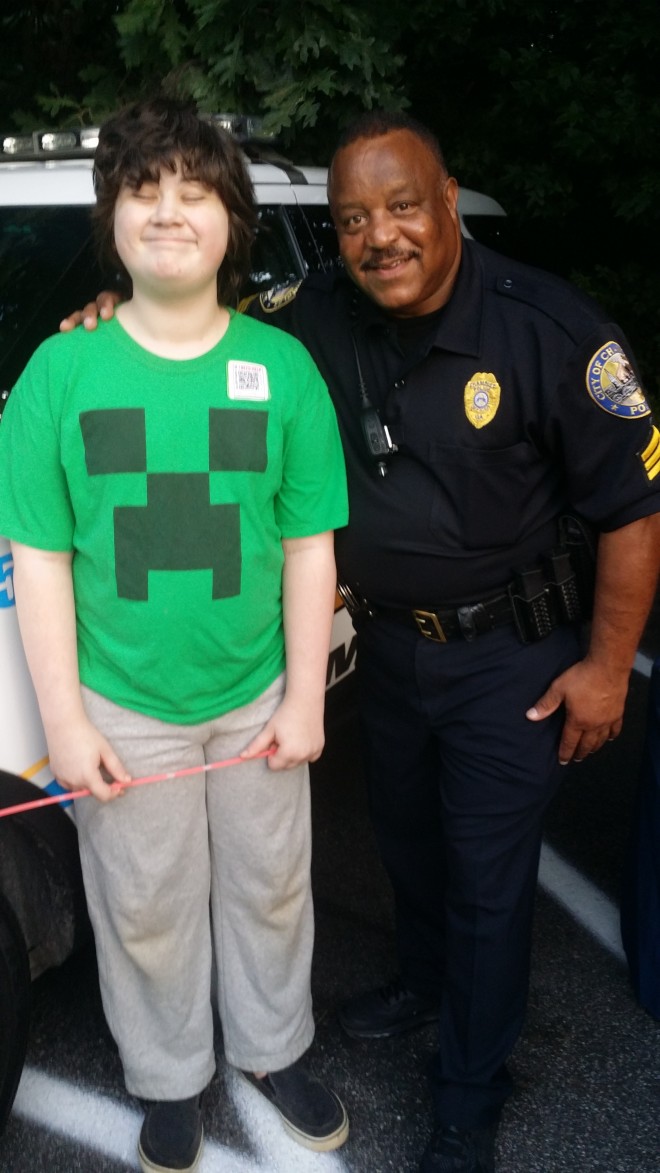 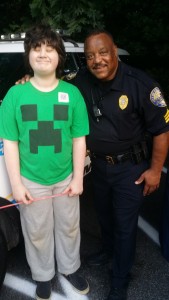 My son wearing his unique QR code at the Chamblee fireworks in 2014.

My boy is a wanderer. After having a girl first, one that was nearly always attached to my side, I was not prepared for the terror of repeatedly having a child go missing in the blink of an eye.

Now he’s 13 years old, 7″ taller than me and weighs 210 pounds. He doesn’t wander often. In fact, I can’t seem to get him to wander… away from his computer, that is

However, we are still prepared; despite the repetition of safety-based social stories and the fact that he prefers to stay in his room… there is always a chance he will impulsively go seek something outside and get caught up in it until he’s no longer sure where he is. There are also large events that we sometimes venture out to, when the odds are stacked in our favor and we have all our tools to make it a successful outing, that breed great opportunities for him to be lost in the crowd.

My son is verbal, but when something happens to him that deviates at all from his normal routine, he shuts down. He knows his name, address, and phone number, but when he’s in distress all he can process is what’s happening to him at that moment. He doesn’t think through asking critical questions or seeking help, he either shuts down exactly where he is or he goes. Like Forrest Gump goes – no idea where he’s going or what or who he’s trying to reach, he just goes.

So how would you respond to a 210-pound, stocky man child (that sometimes wears diapers because of crippling digestive and bowel issues) that cannot tell you his name, where he lives or what’s wrong?

In our case, you could scan him! (What?)

As a parent, I have researched myriad IDs and tracking devices for my child. I’m glad to see so many options available now – so many other parents stepping up to the plate and inventing products to keep their children safe. My son has extreme sensory issues (and I mentioned he’s a 13-year old boy)… he rarely keeps CLOTHES on. A clunky tracking device on him would not be there long.

If I Need Help has saved our bacon on more than one occasion! First of all, the creators are super cool, funny and awesome parents who, like many others, had a dire need to keep their own child safe. Secondly, the QR code patches and clothing were easily tolerated by my son! He actually loves the idea of having his own unique “code” and wears it with pride. 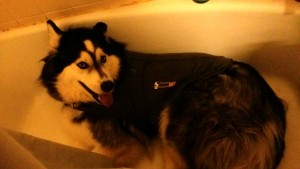 We didn’t make it to fireworks this year. The ones that went off in our neighborhood ALL DAY really put him into a bad sensory state. Together, with our terrified, Thundershirt-clad husky seeking shelter in the tub, we focused on calming routines instead of venturing out to the city’s festivities. ‘Twas quite a night. Last year, however, we went to the City of Chamblee fireworks and had a great time! Donning his QR code on a Minecraft shirt, our first stop at the festival was the police tent, where I introduced my son, explained he was Autistic, and told officers if they spotted him anywhere without me, they should scan his code with their smartphone. The QR code gives instant access to my son’s emergency information, I am able to change anything in his profile REAL TIME based on the scenario, and the entire thing can be emailed to searchers if he went missing. It is his unique ID, a way for him to communicate when he isn’t able.

One time, he was playing with the hose in our front yard and his sister apparently told him to get lost. Being literal like he is, he did just that. In the blink of an eye he was gone – no shirt, no shoes and soaking wet. It took a neighborhood search party, DeKalb PD and a lot of faith that day, but I got my son back safely.

He wasn’t wearing a shirt, so how could the QR code have helped? If I Need Help has some NEW products – they now have custom Dog Tags and ID cards that have the name, number and additional info printed on them along with the QR code.  People who are more independent like these, but they are also good for people who do not keep their shirts on. 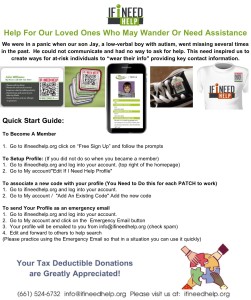 If I Need Help Quick-start Guide

With the free sign up you can create a profile, edit it live in real time, send the profile to other caregivers, and print out your own code. Many people are printing their codes, laminating them and taping or glueing them to their phones, devices or anything else they keep with them regularly.

If you’ve taken my Autism training course, you already know some signs and behaviors that will help you identify that someone may need help. Keep your eyes open for anyone wearing or holding a QR code on their person and don’t be afraid to SCAN IT! You may just be saving a life.