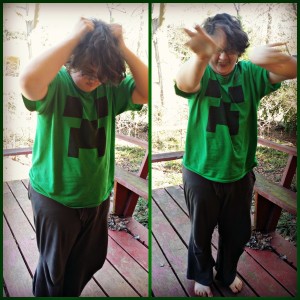 I’m going to be boldly honest right now about how things are for us sometimes, because I believe it can help responders understand more about interacting with autistic individuals.

This is my son…

…Flapping his hands and banging his head because emergency vehicles passed by with lights and sirens, which also set off the neighborhood dogs

…Acting out more than usual because I recently went from a predictable day job to working 13-14 hour night shifts twice a week. Sometimes I sleep during the day on my off days and sometimes I keep “normal” hours. Our whole world has been turned upside down.

…Wearing no shoes outside in the middle of the winter because he doesn’t feel temperatures or pain the way we do (not for long periods of time, I assure you!)

…Donning sweatpants and a loose shirt that has been stretched and has holes in it from a new stimming habit (biting, stretching and poking holes in his clothing while wearing it when he feels anxious or stressed)

Getting closer to him reveals an odoriferous cocktail of 13 year-old boy… scents, occasionally worse due to severe GI issues and a history of bowel obstructions that make him terrified to go to the bathroom until his body forces it out.

If he were with a sitter while I was on shift, or if his older sister called 911 because he was “acting out” or “not acting right,” what would you think if you approached my son on scene based on the things I mentioned above?

A 5’9”, 220 pound THIRTEEN year-old male, outside with no shoes or winter clothes on, flapping his arms, banging his head with his hands, refusing eye contact and answering all questions with unintelligible verbal noises and repetitive phrases such as “Cheeseburger…”

My son would never intentionally hurt anyone, but if he were already in a distressed state and was suddenly surrounded by strangers with radios blaring who were starting to get frustrated and louder because he doesn’t seem to be cooperating the way they feel he should… he would most likely fight those trying to control him.

We must recognize that autism is not actually “altered mental status” because it’s not a mental illness.

It’s not a behavior problem or an excuse for noncompliance.

The CDC says it’s a complex developmental disorder and the National Autism Association says it’s a bio-neurological disability. And with 1 in 64 boys in Georgia diagnosed with autism, the likelihood that you’ll encounter it in the field increases each day.

The behaviors I described above can – on some days – be normal baseline behavior for my son. He stims and hits himself when he’s overwhelmed. He won’t shower unless I make him (or is that just a boy thing?). He won’t voluntarily use the bathroom unless I help him.

Does the knowledge that he has autism mean we as responders shouldn’t keep ourselves safe? Should we forget the restraints and be more “understanding” of his actions?

If you’ve been following my work long enough, you know I NEVER advocate ignoring your protocols or putting yourself in harm’s way. Keep yourself safe always!

But when all else checks out (blood sugar is normal, negative for narcotics or alcohol, no trauma, infection, seizure or stroke…) we’re left scratching our heads and treating someone like my son as a combative psych patient.

What kinds of questions and actions would help, assuming our safety has been established?

But knowing some common signs and behaviors of autism can give you more tools and knowledge for your assessment. A different set of questions can yield very different results (and gain cooperation from the patient!). Questions for the caregiver such as:

If there is no caregiver, try giving the person a pen and paper to write their needs or chief complaint. Even completely verbal adults with autism will quickly lose the ability to speak during meltdowns.

One of the biggest challenges we may face is when there is no diagnosis and the caregiver may not even suspect autism. That’s why I teach emergency responders how to recognize signs and behaviors of autism whether or not the patient or caregiver provides that information. Sometimes just understanding what’s going on – even if we can’t change our actions – can make a world of difference for the person experiencing distress.