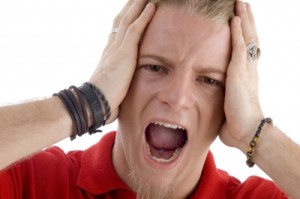 Sensory Processing issues play a bigger role in the daily lives of those with Autism and Asperger’s than most people realize. No matter what behavior I’m addressing with my son or what I encounter on a call, I always start with reducing sensory triggers.

Years, ago, when I finally had a firm understanding of this why this works, I perpetually tried to explain it to the other adults, teachers, caretakers, and yes, even physicians in my son’s life, who insisted that my child needed to be medicated for hyperactive and impulsive behavior.

I remember waiting months to see a highly acclaimed pediatric neurologist before my son was officially diagnosed with Autism. He was four at the time. At our long-awaited appointment, we were in the waiting room for an hour and then the doctor’s office waiting for yet another hour. What four-year-old would NOT be climbing up the walls at that point?

The doctor came in and promptly spent 10 minutes with us.

“Stand on one foot and hop.”

“Copy this drawing of a tree.”

“Ma’am, your son has ADHD, fine motor dyspraxia, ODD (Oppositional Defiant Disorder), and maybe some sensory stuff going on. Here’s your prescription for Adderall. See you in six months.”

Whoa… wha? Oppositional DEFIANT Disorder? He was FOUR! When my daughter was four I practically wanted to SELL her. (Kidding. Mostly.) Of COURSE he was hyper – we just waited TWO hours in a closed room to see this man. And what’s with the meds? No explanation of any of these “disorders”? No constructive suggestions? No support or help?

I researched all of the labels that supposedly defined my baby boy. Yes, he was hyperactive, but the first one that really grabbed my attention was Sensory Processing Disorder. I went through checklist upon checklist and instantly started understanding my son and the world he lives in. Many of his “quirks” were a direct stress-response to how he interprets all the sensory input from his day-to-day environment.

I soon had an entire sensory evaluation done (I say “soon,” it was actually another nine-month waiting list), and then I learned so much more about how my son experiences the world around him, and how physically painful it could be.

Once I started to differentiate between “My body hurts, I’m exploding inside and need help” and “I’m being a boy and testing my boundaries” my whole world changed, and so did my son’s.

What Does This Have To Do With Responding To Calls?

I’m a big fan of Asperger Experts – two adults with Asperger’s Syndrome that have navigated their way through the roughest times of childhood and adolescence and are now helping parents and educators do the same.

They published a video called, “The Sensory Funnel.” Although they are primarily speaking to parents and therapists (or those themselves that have Asperger’s), the scientific explanation about what’s going on is invaluable. You get to hear an adult’s first-hand experience of what the world feels like and how he not only learned to cope with all his struggles but to thrive in spite of them.

For us as responders, I chose this video for you to see as an “abbreviated” plan on scene – an explanation of why it’s imperative to deal with the sensory triggers first. The video also illustrates why trying to go from the top of the funnel down will most likely not get results, especially when trying to gain compliance or diffuse a situation.

Let me know what you think!

One thought on “Emergency Responders: Why Address Sensory Issues First?”